First, some background: the National Academy of Sciences (NAS) is a nonprofit society of scholars created by an Act of Congress that President Lincoln signed into law in 1863. It's not some site founded to subvert the government, or undermine the rule of law. To the contrary, its purpose is to advance the sciences. The National Academy of Medicine, for example, was founded under its charter.
NAS' publication Proceedings of the National Academy of Sciences of the United States of America recently published "Militarization fails to enhance police safety or reduce crime but may harm police reputation," which includes graphs that suggest adding SWAT teams to police departments causes more assaults against police officers.  Of interest to those who like to argue militarization serves some kind of beneficial purpose in protecting police may be the observation that "Estimates for officer deaths, both accidental and felonious, are precise and near zero, partly because they are so rare[.]"  Although there was little increase in death to explain even after SWAT teams' exacerbation of conflicts elevated them, data "show[] a statistically significant 3.2% increase in noninjurious assaults" before adjustment for time trends.  Although the evidence for increasing officer risk is iffy, "there is no evidence that acquiring a SWAT team lowers crime or promotes officer safety."
The article observes that aggressive policing strategies disproportionately target minority communities, but that defenders of militarization claim it's necessary to protect officers. The data disagree. The author concludes that "the routine use of militarized police tactics by local agencies threatens to increase the historic tensions between marginalized groups and the state with no detectable public safety benefit."
Posted by Jaded Consumer at 6:31 PM No comments: Links to this post

Wheeler's Dryad-Born: More Of The Same, And Still Not Finished 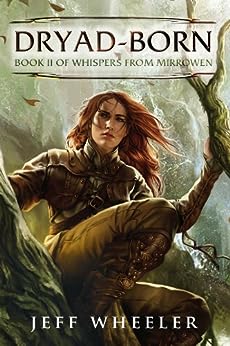 The Jaded Consumer apologizes for the delay in this review, but it's not pleasant to say terrible things about a book that required so much time and effort to craft. Jeff Wheeler's novel Dryad-Born contains all the same good worldbuilding described in The Jaded Consumer's review of Fireblood, but doubles down on its use of an evil group the author calls "Romani" that bear too much similarity to real-world Romani – and the prejudices against them – not to get irritated every time the author attempts to use their villainy to engage the reader's emotions. We see more of the Big Bad Villain in this installment, but it's not clear why he doesn't polish off the protagonists whom he clearly outclasses.  We're left with the impression it amuses the evil dictator to double as his own hit man, and enjoys dragging out conflicts so he can spend more time twirling his moustaches before horrified victims.  It becomes hard to believe.  Yet, it gets worse: it's not even a story yet.

While reviewing the first book in this series, The Jaded Consumer remarked on the experience reading Connie Willis' outstanding time-travel adventure (not the use of the singular) Blackout and All Clear: the editors didn't lift a finger to cushion the blow of taking this great story and sawing it into two volumes, and let readers walk un-warned into one of them.  Without access to All Clear, I would have writhed in fury, interested to see the characters reach some kind of decision about their predicament, but helpless to get more than a hint the author had an actual story in mind, instead of a colorful extended vignette depicting a weird world full of people afraid for their lives.  It's the climactic decision that makes or breaks a story, and the first half of a book hasn't even got a climax to judge.  Thank goodness I happened to have both volumes with me when I finished the first.

Which returns us to Dryad-Born. The second volume still doesn't bring us a conclusion.  Mind you, it's not necessary to show an ultimate conclusion in a second volume – Jim Butcher ably shows in The Codex Alera that you can hold your ultimate conclusion until the sixth volume but still give each volume its own complete story arc and an answer to the volume's story problem even while leaving larger problems overhanging the characters.  The problem is, Wheeler doesn't bother to create a story problem for any of these installments: you need them all to see even one story arc.  It's frustrating.

Or at least it would be, if you still believed in the villain or cared about the world.  There's a lot of secondary-world fantasy to read out there without having to experience the problems presented in Dryad-Born or its companion volumes.
Posted by Jaded Consumer at 2:42 PM No comments: Links to this post