Once More Into The Breach 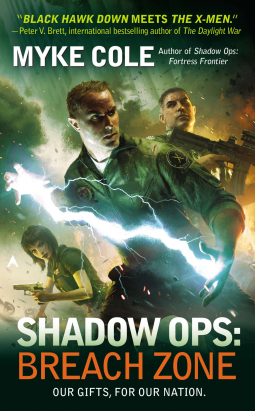 Myke Cole's newest Shadow Ops novel Breach Zone is the first of his work I've read.  For this reason, the reveiw focuses on Breach Zone as a stand-alone novel rather than viewing it as the continuation of a series (which – review spoiler – the book was good enough to inspire me to read).

Overview
Drawing from personal experience with military and law enforcement, Cole paints a nightmare in which police objectives and military objectives become intertwined with personal liberty issues that provoke insurrection in a dark alternative universe in which individuals stand at risk of spontaneously manifesting potentially uncontrollable – and in some cases, outlawed – superpowers. Since people can't pick the powers they manifest, insurrection ensues.  In the Shadow Ops universe, insurrection can be supported not only by personal superpowers but mythological races and Apache gods bent on objectives less noble than liberty and justice for all.  While Myke Cole's newest work involves characters and events a new reader can tell have appeared in previous novels, readers have no trouble picking up not only key characters' motives and back-stories, but can easily find and follow the characters' nuanced and conflicted relationships with each other, their society, their government, and those with whom they work. Another set of divides that's interesting to see explored are the ones between military and law enforcement, between military and civilian command, and between supers who conform to the laws governing supers and those who can't or don't.  New readers can follow those just fine, too. The Shadow Ops world's a complex place full of ugly contradictions.  Myke Cole paints a portrait of the characters and their environments that make it easy to understand the motives behind every scowl and slight.  It's a thing of beauty.

Billed as a military fantasy, Breach Zone doesn't read like the worshipful documentary of a military venture. The book is sympathetic to the antagonists:  the believability and sympathy of adversaries' motives, for example, makes Scylla's personal tragedy much keener than if she'd been crafted of enchanted cardboard like certain other fantasy villains Who Must Not Be Named.  It's hard not to root for her redemption.  The train-wreck laid out for the reader is an exciting tale of inevitable and avoidable but utterly wasteful destruction – tragic but hopeful – and it's a great ride.

Out of Order Reading
To read Shadow Ops: Breach Zone before the earlier Shadow Ops books is not only possible, but enjoyable. Some of the terms used in the Shadow Ops world – a Probe isn't a measuring tool – won't make sense for a while unless you start with the Appendix (which gives a little world overview), but even world-specific definitions eventually become clear without resort to the Appendix.

Shadow Ops isn't an episodic world in which books don't affect one another; events have a chronology and the outcomes of prior books clearly affect events in Breach Zone. The biggest risk in out-of-order reading isn't confusion but spoilers: characters' backstories are intertwined with the events of prior books, and the aftermath of earlier conflicts forms the basis for current attitudes and current problems. So, reading Shadow Ops first tells you how prior books' main conflicts shook out and who lived.

But if you can read Breach Zone and can't lay your hands on Myke Cole's other works yet, don't despair: you can enjoy it just fine.

Why You Want To Read Breach Zone
Military thrillers often stand on plot to hold readers, and play on your appreciation of military values to give you the feeling that the story succeeded. Sacrifice is powerful and emotional and writers can pull quite a bit out of it. It's expected to see use of the theme in a genre where it's a major feature of the cultural landscape.

But it's not every writer of military stories that shows character development. Sure, you often see a character moving from fear to aggression, or doubt to confidence, but how often in a military story do we see characters transforming in meaningful ways that show their values and beliefs?  The death and darkness overshadowing the bulk of Breach Zone is redeemed in the many transformations that suggest to the reader that everybody – even minor characters who die horrible senseless deaths – is capable of change.  There's plenty of tragedy – people's decisions, seemingly inevitable results of their character and values, lead them to their doom on all sides of the conflict.  The joy in the book doesn't come only from one-liners, though it's got that;  for example, when the male lead demonstrates he can accept correction and obey instructions, his romantic interest tells him the fact improves their outlook. But Myke Cole goes beyond one-liners and high-stakes plot problems to say something about humanity: by showing so many characters changing, he shows us the uplifting possibility that people really can change for the better.

Then, there's the non-simplicity of the story.  Myke Cole depicts plausible-feeling people reacting to their immediate circumstances in sympathetic, plausible ways, without making anyone into a cackling caricature of crazy.  The sympathetic portrayal of nearly every perspective in the book necessarily highlights the complexity of the problems each wants solved – and the deepness of problems that won't easily be solved.

There's not just plot, and characterization, but character development. It's not just an exciting series of conflicts; it feels good to read.

Happy Days (Content Warning)
It's a tradition at The Jaded Consumer to deliver gentle warnings to people who might not be part of the target audience for a book reviewed here. Inspired by readers who turned on Jim Butcher over religion for having the temerity to discuss the work of angels and demons with the same seriousness with which he wrote about the politics among the Queens of Faerie (and, I ask you:  where else will you find top queens but in a place called Faerie?), the first such warning was given for Eliza Crewe's debut novel Cracked, to alert readers identifying themselves as unwilling to tolerate depiction of religion in urban fantasy (Crewe's characters included earnest Templars in a modern crusade). The review for Steven Brust's and Skyler White's collaborative work The Incrementalists, by contrast, alerts readers who might risk apoplexy encountering real-world politics in their fantasy. None of these warnings is intended to slight the works; they're good books, and great reads. People who would avoid Jim Butcher's Dresden Files books over the appearance of angels or holy swords are missing out on all the fun that's erupted since praise was heaped on Butcher here over five years ago. But those who won't like religious content should know it's there, and go buy his Codex Alera instead.

That having been said, the consumer alert for Breach Zone is extremely tame. It's this: the book is optimistic.  And not in a little way.  In a deep way: Myke Cole depicts positive change in individuals as possible.  If you want a book in which the bad guys are just bad, and in which bad guys are ultimately crushed under the heel of the righteous simply because the righteous are smarter and faster and stronger and have better equipment – and you don't want to ask yourself hard questions about what the world would look like if the bad guys were as smart and as well trained and funded and equipped – go read a Tom Clancy novel.  Think about the villain who betrayed loyal troops to be massacred by drug lords in Clancy's Clear and Present Danger: he moves from a self-interested corrupt intelligence bureaucrat willing to throw fellow countrymen under the bus for a few bucks, to a self-interested corrupt intelligence bureaucrat who is willing to throw himself under a bus to avoid the public humiliation and drawn-out proceedings involved in his inevitable prosecution.  It's not a transformation, its the author celebrating a protagonist applying cruelty as justice to bully a caught-in-the-act bastard into suicide – with impunity, with the author's approval, and while the author expects readers to celebrate it with him. It's not transformation, it's public shaming.  There's no optimism on either side of such a resolution, only schadenfreude.  (Clancy's books still have rocking aspects; who else depicts with such detailed glee the complexity of modern military operations, and the relationship between intelligence assets and operators' execution of resulting plans?  Who else shows the great chess game of modern military decision-making?  Clancy's work has great merit, just not on the basis of its depiction of character transformation.)  Contrast Cole's Breach Zone, in which a key character's emotional relationship to society's different classes changes. The character's very concept of society's classes changes.  This is real transformation.  And Cole sells it: when it hits, it's easy to believe.  To believe that's possible requires a deeply optimistic outlook on humanity.

And (spoiler) this has a consequence: cooperation.  When you think of problems in which you notice government involvement and military action in the news, it's hard not to suppose that the cooperation that wins the day in Breach Zone isn't a better answer than some of the knee-jerk first responses that appear in the news.  So, maybe Breach Zone has some political content. But the real consumer warning is this: if you require a military thriller to have darkness, death, and destruction as its overhanging message, or if you require the big story in a military thriller to be the destruction of "enemies" because the "good guys" are just better, or if you can't swallow the idea there's a way to solve problems rather than just shoot enemies faster – this book may not be for you.  This book is best read by those willing to consider that humans can change for the better.  If you can't buy that, you might find it irritating.

Conclusion
Myke Cole's Breach Zone is so complete on its own that knowledge of prior work isn't essential to understanding and enjoying it. But it's an outstanding advertisement for his earlier works to those who haven't read them.  It's clear that the reader's relationship with characters from earlier books, if fleshed out in through experience with them, could make the climax of the story more deeply resonant with readers. But it's perfectly capable of standing on its own.

And it's a delight.

Breach Zone presents a rare respect for every kind of character that exists in the story: civilian and government; military and law enforcement; super and normal; outlaw and posse.  The fact all the adversary veiwpoints are so believable – and their positions presented so sympathetically – makes the conflict and its resolution so much more enjoyable than plain-vanilla black-and-white tales involving constructed characters of pure evil and their necessarily-attracted protagonist opponents. Sure, Myke Cole also must construct his characters – but they don't have that stamped-from-the-mold feel one sees in characters made with less care. Cole's central characters have a "real" feel that's a pleasure to see and read.

Best of all, there are already two more to read.
Posted by Jaded Consumer at 2:55 PM No comments: Links to this post