In explaining his decision to run for President, Trump described himself as Hilary's worst nightmare.  Trump hasn't been reading the news.  According to CNN, Bernie Sanders would beat Trump by an even larger margin than Hillary Clinton.

Hillary's worst nightmare is a real liberal, capable of getting liberal votes instead of merely getting "Defeat the Republicans" votes.

To emphasize: Bernie Sanders had better polling against Trump than Hillary Clinton.  Among registered voters surveyed for the CNN poll,  Clinton would beat Trump 56% to 40%, whereas Sanders would defeat Trump 59% to 38%.

As for Trump, his "I'm not Hillary Clinton" candidacy doesn't seem to have done him much good among voters, even if he's got the highest name recognition in the un-thinned Republican field.
Posted by Jaded Consumer at 2:25 PM No comments: Links to this post

Article on Apple: Why It's A Buy

Seeking Alpha published a new Jaded Consumer article, this one on Apple.  Apple's Fall: Why It's A Buy.

Enjoy :-)
Posted by Jaded Consumer at 8:24 AM No comments: Links to this post 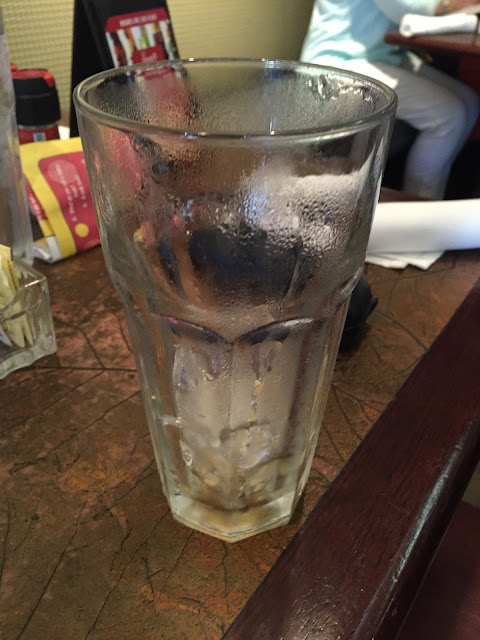 If you can spot what's wrong with this glass of iced tea, you're doing better than the staff of Hungry's Café & Bistro on Memorial Drive in Houston, Texas.  (Reviews on Yelp)

Normally poor iced tea performance is balanced by something going right with the food, but the food came so slowly I am aware only that we avoided cannibalism, and can't really report with authority on how anything tasted because we'd gone feral.

Usually I stop at the Hungry's on Rice Blvd., where I'm sure the tea is larger and I've been able to persuade servers to keep it full.

Maybe next time.
Posted by Jaded Consumer at 7:38 PM No comments: Links to this post