Seeking Alpha just published the Jaded Consumer article Disney Alchemists Convert Lead to Gold On Command.  Read how Disney reorients its resources toward unencumbered intellectual property to improve its margins.
Posted by Jaded Consumer at 10:00 AM No comments: Links to this post 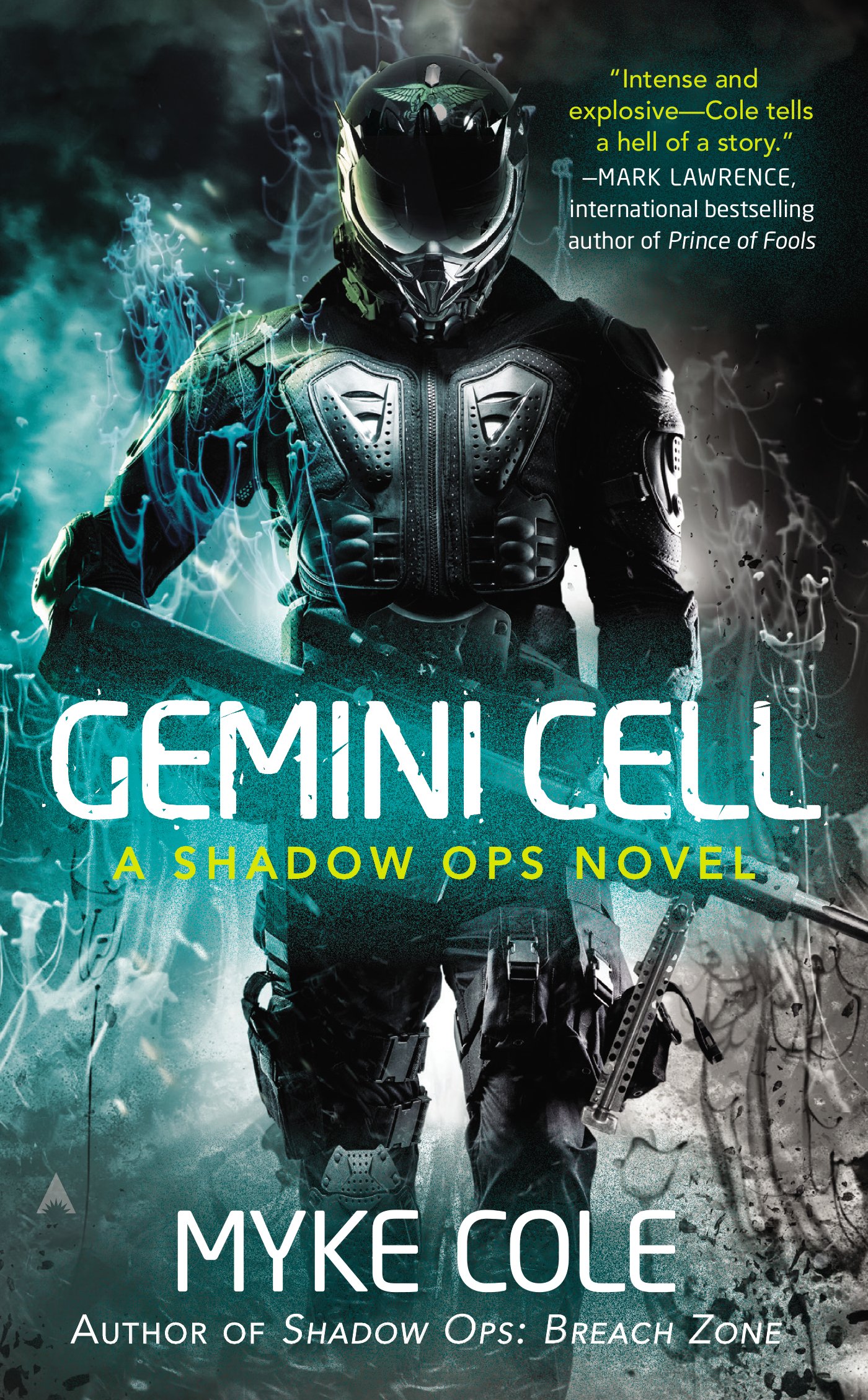 Set in the universe of his first Shadow Ops trilogy, Myke Cole's new novel Gemini Cell requires no background from prior books to enjoy. This was also true of his first trilogy's capstone volume, Shadow Ops: Breach Zone (reviewed here);  Cole has a gift for writing books that you can enjoy without additional background. That having been said, you should go enjoy them, especially if you're reading this while Gemini Cell is still a few weeks from release.

Overview
Gemini Cell is set in an alternate universe in which modern-day military technology and tactics meet paranormal superpowers poorly understood by the government (or by initially-oblivious citizens).  Unlike the first Shadow Ops trilogy – in which government regulations spelled out how individuals who manifested powers should register and be dealt with – Gemini Cell is set in the early days of the paranormal awakening that sweeps the globe, before the rules are clear, and before the protagonist has any idea what he's in for once he find himself "in business" with supernatural practitioners.

The fact that nobody seems to understand the rules governing the supernatural powers on display in the book means that the protagonist has little ability to tell when he's receiving accurate information about the limits and consequences of his paranormal predicament, when he's being fed a line of bull, or when he's looking at fools who have no idea what they're talking about.  This raises one of the major themes of the book: information quality.  The protagonist's work in a security-conscious military organization means that he's used to activity that is strongly intelligence-driven.  Once we begin to understand that all the information he has is doubtful – or  subject to limitations that impair its utility – we see that for all his personal power the protagonist is blind, unable to achieve his goals, because he needs credible intelligence on which to act.

Another theme is reason over passion.  Professional calm is presented as the only way to obtain useful results from violence; an antagonist demands impassioned indulgence of bloodthirsty urges as the price of physical power, creating an ongoing conflict.  Myke Cole illustrates the futility of seeking balance in a series of conflicts engineered to demonstrate that without care and control, violence has no utility at all to a civilized person.

More themes appear, but why spoil the story?

By planting numerous themes early and carrying them throughout the work, Myke Cole ensures the reader understand the problems they pose when they entangle the protagonist and complicate his conflicts. The result is conflict with more than the merely-physical dimension, and resolutions readers can care about.  This is a book well done.

Protagonist and Adversity
Gemini Cell is the story of Jim Schweitzer, a Navy SEAL who doesn't expect to star in a mashup between Revenge of the Ninja and Frankenstein mixed with a dose of Ghost.  From the back-cover copy, we know Schweitzer is going to bite it – and soon.  So we are kind of at the edge of our seats from the outset, expecting him to die at any moment, but hoping he'll manage to come out okay despite everything.

The story opens in an art gallery where Schweitzer wants to support his wife Sarah as she advances a few big steps in her dream career as a visual artist.  He knows Sarah expects him to flake out over work, and he assures her he's good for the night.  He really wants it to be true, too.  You know how this scene ends already, don't you?  It helps define Schweitzer, to ground him in a world that's larger than his job, and to establish both his values and the priorities with which he grapples.

Jim Schweitzer's plot arc in Gemini Cell may be complicated by his unexpected career as an unkillable (being already dead) special forces operator, but it's largely his confrontation of the first-scene conflict writ large: he wants to do right by his family – but since his death, his job's demands have only grown worse.  His desire to make good on his role as a father and husband is so obviously doomed (the "why" risks spoilers), but you can't help rooting for him – just as you hoped he'd manage to cheat the death promised on the back cover, even if just for another page or two.

Of course, questions overhang – how, exactly, did Jim get into this mess in the first place?  There's more to learn, and you can expect future volumes to satisfy hunger for answers.

Other Characters
The story isn't all Jim Schweitzer, or testosterone-drenched white men gunning down whole armies by one-handing belt-fed machine guns whose ammo chains never shorten.  Scenes cut between plotlines about Jim, and about people wondering what has become of Jim.  The supporting cast includes people who seem by the close of the book to be mostly good, and some whom we might be persuaded have become treacherous bad backstabbers fueled secretly by cackling villainy in an IV bag.  And they're not all male: Sarah proves to be a badass in her own right, and Jim's immediately-senior NCO is a Chief Petty Officer who boards target vessels with her team and shoots as effectively as she commands.  Techs in the unit Jim lands in after his re-animation are a co-ed lot, and guards appear in both genders.  Names and physical descriptions paint a full-color world with multiple nationalities and racial backgrounds.  Jim's best friend is Asian.

The supporting cast isn't just a cheering section or a mook squad.  Repeatedly Jim finds himself in positions in which his ability to act effectively turns on support from others.  It's not an ensemble cast, of course;  the story really is about Jim Schweitzer.  But it's not Conan – and in the twenty-first century, that's a good thing.

Darkness
As in prior Myke Cole books, Gemini Cell includes a lot of conflict that starts close to the heart.  Tension isn't presented purely by targets:  characters suffer internal conflicts, trouble with work, concern about information that's withheld from further up the chain of command, known and unknown betrayals by people in positions of trust or authority, and more.  Jim depends on his unit to support him following his re-animation, but can he trust what its spokespeople tell him?  The whole scale of revealed and suggested conflicts risks spoilers, but the fact the good guys live in a world of iffy intelligence and dubious loyalty makes the place a lot darker than military thrillers that focus more on the gung-ho aspect of unfolding neat military plans on an unprepared opponent, or manly men outnumbered and surrounded but fighting their way to victory with their backs to wall.

There are unprepared targets in Gemini Cell, of course … but are they all bad guys?  How would the good guys ever learn?  The book hits a few times on the ambiguous position of good guys who act (with finality) on information they know is incomplete.  They trust the information, and the instruction to shoot, even without the means to tell independently what treatment best suits each target.  This invites interesting questions.  What if the wrong people ended up in charge of the unit?  (Either one, really: the one he started in, or the one into which he was re-animated….)

Are the wrong people in charge already?

Craftsmanship
On social media and in interviews, Myke Cole has revealed that he is not a seat-of-the-pants writer, but meticulously plans his stories and subjects his manuscripts to a grueling edit process that yields multiple successive drafts.  From his comments, it's clear the process is painful.  But from this end of the product pipeline, I can say this: it's worth it.

Cole knows where his protagonist must go and what mysteries he must unravel, so with careful planning he is able in this volume to set up and solve a one-book problem while laying the groundwork for the protagonist to advance into bigger problems that require the first volume's knowledge to solve.  There's no question that Cole's grueling production process yields a better-designed, better-paced work of fiction than one can expect to get from a less rigorous process.  For an example of another author who relies on a demanding planning process to engineer reliably outstanding stories, book after book, without painting himself into a corner or writing duds, consider Jim Butcher, author of the 6-volume fantasy series Codex Alera and the still-in-progress-after-fifteen-volumes Dresden Files series.  Jim Butcher's praises have been sung here since 2008.  It's about the craft.  Butcher's success proves rigorous process works, even after dozens of books, and Cole's universe is a wonderful place to see the result of this technique on display.  It's hard work, but Cole understands it's necessary.  And he's out there right now, hard at work on the next volume, suffering for your amusement.

Readers: you're in good hands with Myke Cole.

Conclusion
Cole's universe is populated by characters with interesting internal and external conflicts that are easy to get interested in seeing resolved.  People who worry about picking up a series' first book out of cliffhanger-dissatisfaction concerns need not worry.  Gemini Cell closes the story arc on which it opens, and it feels done when it closes.  Sure, the characters identify some doorways for later books to breach, but rather than detract from the work this builds anticipation for the character’s development.  The climax puts Jim to the question he's needed to answer from the first chapter, and sets him on the path to solve the problems he's unearthed on the way.  It’s a good day.

And it's fun.  After the initial anticipation to see the back-cover discussion of Jim's death play out – turns out, he’s tough to kill – readers enjoy a long sequence in which the action and suspense in the two main plot threads make the book hard to put it down until the end stands in sight.  Unless you enjoy losing sleep, pick it up early in the day.  You've been warned.

Myke Cole’s Gemini Cell offers an exciting story about a new character with a novel superpower-problem, set in a universe he's had three other books to understand fully enough to embed a mystery that will take another couple of books to solve.  I look forward to those books – and so will you.

(For those interested in an interview with Myke Cole, try this one, on which the author says, "I love new and unusual questions."  Also, his mother read it and said, "What a great interview!"  So read it, already.)
Posted by Jaded Consumer at 10:00 AM 1 comment: Links to this post