Not posting on police violence toward U.S. civilians isn't because there's been none.  Now, when you wave to police, it risks provoking the kind of escalating confrontation that got the unarmed 17yo Deven Guilford shot seven times and killed after flashing his headlights to alert an officer that his high-intensity headlights appeared to be set on high-beam.  And don't expect the district attorney to do justice:  you and your mom (whom the police beat while tazing you) will be fed to the local prosecution machine and driven to penury fighting fabricated charges.

Apparently the only safe strategy is not to be noticed at all.
Posted by Jaded Consumer at 9:25 AM No comments: Links to this post 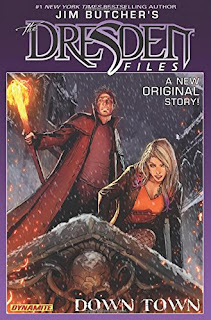 Jim Butcher, author of the Dresden Files, Codex Alera, and the Cinder Spires series, has just released a Dresden Files story in the form of his Down Town graphic novel collection from Dynamite Entertainment.  Fans of the Dresden Files (worshipfully reviewed here since 2008) will want to read them for completeness, but they contain enough backstory that one need not already be a fan to follow and enjoy.  (The backstory isn't heavy, and doesn't distract.)  Readability for those who don't already know the novels is an improvement from War Cry, in which prior knowledge of Harry's allies is important when help arrives in the nick of time.  Down Town feels the most solid Dresden Files graphic novel so far.  The art by Carlos Gomez gives a distinct character to everyone readers have only imagined from the novels, and co-writer Mark Powers has helped craft Butcher's concept and outline as a fully-developed graphic novel.

Down Town opens a few months after the close of White Night.  This is important, as it drives the story villain and forces Harry into confrontation/cooperation with the gangster Marcone, whom Harry just helped become a signatory to the Unseelie Accords (a treaty between the world's major supernatural forces).  Now that Marcone is the "Baron" of Chicago, and his protection rackets include guarantees against supernatural threats, he's attracted a new class of adversary.  When the action begins, Molly is giving Harry attitude about his instruction methods while, unbeknownst to most of Chicago, an awful menace threatens the city.  Mostly, because Marcone has claimed it.  Which, of course, Harry's signature made possible.

Readers of the books will immediately discover something the books don't offer: omniscient perspective.  The main story line in the Dresden Files is all first-person from Harry's perspective, which limits what Butcher can show the reader (by limiting what Harry can know without spoiling the story solution).  While this means developments can be a surprise to the reader, they limit the things the story can do to build suspends.  Remember how much more exciting it was to see a Hitchcock scene when you knew about the bomb ticking beneath the table?  Omniscient perspective lets Butcher show you what in a Dresden Files book would be the villain's off-screen action.  It helps paint the villain's perspective and motives when they're not immediate and personal.  In a work this length, it aids the setup so the story feels believable while making sure the reader doesn't miss any of the mayhem occurring anywhere in town.  Although the short stories from secondary characters' perspective offer a view into their minds, Down Town offers a view into Harry's mind, then Molly's, during the same story arc.  It's fun to watch how they (mis)understand what's going on about them and haul themselves out of one jam after another.

As with the Dresden Files novels, Down Town depicts the secondary characters with all the strengths they possess:  Marcone's iron will, Molly's quick-thinking use of less-flashy magic, and Murph's heroism in the face of unreasonable circumstance.  Down Town provides enough disasters, twists, and reversals to keep readers on the edge of their seats, and as with the Dresden Files universe when it's at its best the solution to the story's problem isn't more force but more finesse.  It's a fun story, showing Harry and his friends and frenemies pitted against a supernatural threat perfectly suited to the Dresden Files universe.

Although the story is solid enough to entertain those who aren't established fans of the books, the additional color on Molly's apprenticeship, Muphy's off-screen police work, Bob's local spirit contacts, and so forth will especially endear the story to fans who can't get enough of the characters and their world.

Posted by Jaded Consumer at 1:12 PM No comments: Links to this post