The future of Netflix looks grim as it simultaneously competes with two key partners: those who provide the bandwidth that makes Netflix streaming possible (AT&T and Comcast sell bandwidth as a sideline to their sale of multimedia subscriptions), and Amazon – whose Amazon Web Services runs Netflix' back-end (and that of Netflix' streaming service, which pays less for the service).

I pitch Netflix as the short leg of a Disney long/short. Those who love Amazon could use it as the long, but I'm nervous about Amazon's nosebleed P/E and its thin margins.
Posted by Jaded Consumer at 5:32 PM No comments: Links to this post

Email ThisBlogThis!Share to TwitterShare to FacebookShare to Pinterest
Labels: Investments

At Seeking Alpha, I've got a new article on the future of Apple's growth. The company's currently outsized growth is a pretty good indicator that it hasn't peaked. In a peak, you usually see the growth taper, not sit north of 90% from the comparable year-ago quarter.
Posted by Jaded Consumer at 5:28 PM No comments: Links to this post

Just published at Seeking Alpha, the newest article from the Jaded Consumer looks at the effect on your taxes of all those share issuances ACAS is conducting at its managed funds AGNC and MTGE.

In a word: it's good news.
Posted by Jaded Consumer at 12:58 PM No comments: Links to this post

A Quick Look At Some Smartphone Has-Beens

Although Moody's and Standard & Poor's ratings services have kept ratings on Nokia's (NOK) debt just above junk-grade (Moody, S&P), Fitch stepped up to the plate with a new debt rating of BBB- for Nokia's obligations. Nokia defended its creditworthiness by displaying its multibillion-dollar war chest, but honestly: the last two >$1B bond issues can't be repeated, and the company is hemorrhaging while trying to build iPhone-competitors for Microsoft. Nokia managed to lose $1.2B last quarter while Microsoft is paying the firm to build smartphones. Meanwhile, its non-smartphone business isn't keeping it afloat.

This is mostly interesting not because Nokia was a paragon of innovation, but because I recently singled it out as a top smartphone loser one should consider as the short leg of a proposed long/short favoring Apple.

I honestly don't know whether the convention is to use the purchase (close) price to calculate yield (~15.4%), or to use the price at which the position was opened (~15%), but in either case this isn't bad from 2/29 to 4/23. Rounding the time in the position up to two months, this annualizes to a rate of return exceeding 100% (it'd be over 130% if there were no transactions costs, but small differences grow with compounding). For a high-confidence position, this isn't too bad. I had actually expected the company to drift sideways longer than it did, but the current price of $13.46 would not have put me in as much profit as if I'd enjoyed the additional revenues from the put options. If it pops, I may return. I'll have to have a look at it.

I still have the long leg of the trade: AAPL at $543, in a share count matched to the size of the RIMM investment. At today's ~$610, this is about $67 a share up, or 12.3% (annualized rate would be 100%). The truth is that I won't sell this any time soon. On the recent pullback below $560, I bought some AAPL with the funds I injected into my retirement accounts over tax season, and those shares I may sell as they pop in order to rotate them into something that would be more painful to own in a non-tax-deferred account.

If I thought holding AAPL was a bad risk, I wouldn't own it without the short leg – but this is a stock whose risks I'll accept. And whose profits.
Posted by Jaded Consumer at 11:07 AM No comments: Links to this post

Thanks to more clever management at ACAS, AGNC now has a preferred issue. Recalling that ACAS' fee is based on funds under management, the managers are unconcerned whether equity is raised in common or preferred issues. The $150m preferred issue will yield ACAS another $156,250 per month in management fees atop those already paid by AGNC, plus fees on the equity reinvested from income made on the issue.

And as described at Seeking Alpha ("Understanding American Capital Agency's New Preferred Issue"), there will definitely be something to reinvest after paying the preferred shareholders their 8% on the $25/sh in equity in each stub of preferred.
Posted by Jaded Consumer at 5:21 PM No comments: Links to this post

Buffet Pays More Than His Secretary

Not that Buffett can't lobby to be taxed at a higher rate than he is currently taxed, or that feeling that he could pay more is somehow illegitimate, but the basis for a tax increase should be something more sound than the tax rate shell game being perpetrated on observers innocent of how the tax system really works.

Now, for something that might prove to be a real puzzle: why is "carried interest" – a bonus paid to fund managers for service that exceeds performance metrics – treated as capital gain rather than the ordinary income of the fund manager? The difference is 15% vs. 35% in marginal rate. Anyone care to venture an explanation? I haven't researched this one but it was certainly a surprise.
Posted by Jaded Consumer at 8:40 AM No comments: Links to this post

Seeking Alpha just published a new article, "Is Apple's 'Share' In Jeopardy?" The article discusses profit share as distinct from market share, and the difference between being required to have unit sales share to drive a commodity product strategy and having the luxury of selling a differentiated product. My take: the "share" that makes Apple valuable isn't in danger from unit share competition by low-margin competitors. Also: Apple's supply-chain dominance and vertical integration make it more attractive as a commodity competitor than, say, a Dell. Apple's IP provides a moat Dell lacks.

Comments have been largely favorable, but one comment in particular raised a giggle:

Lamborghini doesn't make an "economy" model to gain the low-end market. Neither does Apple.
BikerK

I giggle, because L owns one of these: 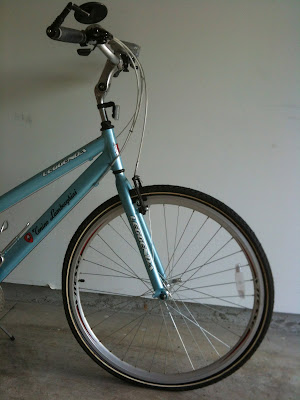 Granted, it hasn't got the disc brakes and other snazzy features of the Porsche bicycle, but the Lamborghini bicycle certainly exists. The BikerK is right, though: even these bicycles – orders of magnitude cheaper than cars bearing the same nameplates – aren't attempting to "gain" the low-end market. They're just participating in completely different markets.

Compare the iPod, though. Apple migrated from a high-end, top-dollar Mac-only product to a product ecosystem encompassing players with price points scattered from $50 to $300, choking the air out of competitors seeking a safe haven at some low price point from which to stage an assault on Apple's higher-margin product offerings. Ten years on, you can see how that assault has done. Apple's effort to protect its margins from being destroyed by third-party DRM licensing fees resulted in the world's largest music store and the effective destruction of the market for DRM music. Is anyone but Apple making real profit from handheld music players?
And that may be where phones and tablets are going: not the whole market, or even most of the market, but still most of the profit.
Posted by Jaded Consumer at 8:00 AM No comments: Links to this post

Controlling For Volatility By Shorting Losers

The Jaded Consumer has a new article at Seeking Alpha that looks at how to control the effect on one's portfolio of a volatile holding like Apple by shorting a competitor that will do worse than it over time (but will be blown about in the same winds that make unhedged long positions frightening). Investing Long/Short To Manage Volatility in Apple follows Investing In Smartphone Failures, which looks at Research In Motion and Nokia as illustrations of companies that might make a good short to pair against an investment in Apple. The articles seek to explain the reason one might want to enter a long/short in the first place, and form a sort of a prequel to the article on why the AAPL/RIMM long/short is attractive.

Other articles take a longer look at Research In Motion's potential and its long-term risks. Eventually, when RIMM's investor constituency stops pricing the firm as if it has enterprise value and won't simply squander the resources its management holds for investors, RIMM will stop being an attractive short. Then, maybe we take a look at Nokia. If Dell becomes a large enough force in smartphones, we can revisit whether it's become a services company or is still a low-margin commodity vendor with no moat.
Posted by Jaded Consumer at 5:39 PM No comments: Links to this post

Now that RIMM's quarterly earnings are negative, the question arises whether it's in a hopeless death spiral or, like Apple in the late '90s, needs a little time to finish a major OS transition.

Will RIMM turn out a differentiated enterprise product by year-end, or die the death of low-volume firms competing on price?

This and more are addressed at Seeking Alpha in my latest article and in its comments.

For perspective, I've not exactly bet RIMM will fail but have picked it as the short leg of a AAPL/RIMM long/short based on the superior competitiveness of AAPL over the next few quarters. The argument there is in Apple: The Long And The Short If It.

There are enough partisans who believe RIMM will turn things around that it's certain there's room for further decline, particularly if the company burns cash trying to re-establish brand and share after its recent share losses and technical failures.
Posted by Jaded Consumer at 6:09 PM No comments: Links to this post